The successful business setups were not always the same at the beginning of their journey. Due to the massive accomplishment, it’s quite hard to describe the condition of enterprises during their early days. But witnessing the growth of MVP cases in the contemporary competitive era of technological advancements, it is not difficult to believe that successful MVP startups are now enjoying great brand recognition and hefty revenues. The enterprises that adopted MVP development calculating the impending technical progressions are fruitfully driving upon the roads leading towards prosperity. Before having a look at the list of successful startups, let’s first understand the concept of MVP imperative to be affluent.

What is an MVP?

MVP stands for Minimum Viable Product, a smaller version of a new product having core functionality with few basic features essential to fulfill the customer’s digital requirements and constantly fluctuating market tendencies. It’s an incredible process of testing the viability of an idea at the least consumption of capital, time, effort, and resources. MVP is fundamentally launched in the hi-tech market for the collection of customer feedback, imperative to iterate the software solution or application regularly.

What is the Importance of MVP for Startups?

MVP is genuinely a great benefit for the startups struggling to commence their corporate voyage with low capital investment. It’s an opportunity for survival operating wonderfully in the favor of startups. The prime objective of an MVP is to deliver a product meeting the vital technological needs of the potential customers and be the best solution to the market problems. To efficiently understand the process of MVP development you can read the MVP Complete Guide.

Here is a list of benefits startups should know before hiring an MVP development company:

MVP development process allows you to be specific while concentrating upon the construction of core functionality aiming to crack user problems at the least consumption of cost and time.  This eventually keeps your entire process on track and supports you in the upcoming phase of decision-making.

Building strong relationships with your product users gives you a fantastic position in the existing sphere of technological progressions. Startups working in collaboration with the customers and stakeholders are definitely among the ones making prodigious profits. MVP provides you a great route to customers’ digital living. Users can become a great source of business for startups if they employ the effective MVP approach.

A comprehensive market survey and detailed study of customer requirements can never go wrong. MVPs are developed to fill up the market gaps and introduce an exceptional software or application taking complete care of potential user needs. Customer reviews collected employing distinct sources assist you in the development of a perfect product and let the startups know about the market preferences.

MVP development saves the startups from getting stuck in difficult features. It’s an initial stage of production concentrating upon basic functionality without any complicated elements. Customers could effortlessly enjoy the important component without any hindrance or confusion through the development of MVP for startups.

The development of core features fastens up the entire process and makes the product reach the market at quite a rapid pace. The release of the first installment allows the MVP development company to gather customer feedback for the creation of impending iterations. Time schedules are decided during the planning phase; therefore, the startups have no further time as well as money to waste on the useless features. MVPs for startups usually start with minimal progress towards incremental growth.

The knowledge of MVP advantages must have augmented the inquisitiveness of entrepreneurs. To move your expedition smoothly towards the catalog of successful MVP startups, let’s have a look at the list of famous brands who started off their journey with MVP for startups but now enjoying their effortless drive on the roads leading to incredible capital gains.

The social platform called Facebook today was not really the same in the initial days of its operation. Mark Zuckerberg, the creator of Facebook in collaboration with his three friends created Facemash while working on a project at Harvard University. The website was quite simple but didn’t work in their favor due to the utilization of students’ photographs stolen from the university record. The website went off in just a few days of its operations with some penalties for the inventors.

In January 2004, Mark Zuckerberg again deliberated an application for the facilitation of students at Harvard University. The innovative design was known as “Thefacebook” back then and it was not the same one we are currently employing to remain socially connected. Firstly, the site was only accessible by university students, but the augmentation of its popularity forced its expansion to over 25000 high schools in many distinct countries. 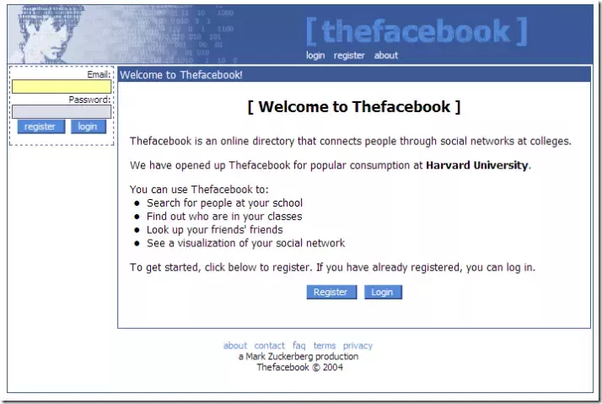 In September 2006, Facebook allowed everyone to get registered on their platform over the age of 13 with a variety of attractive online services. Facebook didn’t become a great hit overnight rather it was a basic product designed by Mark Zuckerberg to satisfy the development objectives. The application was earlier launched to a few initial customers for testing the feasibility of the idea and collecting valuable user feedback.

Twitter was initially called a “twtter”, a 140-character social interacting website designed for the communication of a small group of individuals. The journey started in March 2006 by the incredible teamwork of four board members of the Odeo podcasting company.

Twitter was actually designed for the communication of employees working at Odeo. It was a platform designed to send or receive messages on a modest organizational scale. This was essentially the phase of internal testing done to recognize the viability of an idea. Twitter became available for public use in July 2006.

Twitter holds the second slot in the list of most famous social networking websites. It’s share price has seen a great increase over the few years of its operation.

Drew Houston, the founder of Dropbox was never satisfied with the performance of any cloud storage available in the competitive technology market. Therefore, he decided to innovate something simple yet secure for the hi-tech operators. The aim of his invention was to provide users with a safe cloud storage solution having no complicated barriers.

Drew was very clear about the concept of MVP at the start of its development procedure. His mission was, to begin with, small scale, capture user interests, gain favorable feedback and jump into the target market with a remarkable product. He launched a 30-second video in the market even before the MVP launch in order to make the users understand the product’s functionality.

Dropbox became an instant hit. The demonstration video was released in April 2007 and resultantly received thousands of messages from interested folks. The landing page of Dropbox took the reading of over 70,000 email addresses, enthralled to be the initial customers. This process of validating the technical idea worked quite well for Drew Houston and depicted product demand in the high-tech market.

The journey of uber started in Paris during the year 2008 with the collaboration of two friends, Travis Kalanick and Garrett Camp. The idea comes to their attention when both the friends remain unable to find a cab during a chilly night after attending a tech conference. The thought behind the creation of an incredible application was just to have a ride-booking convenience connected with our handy devices.

In 2009, Kalanick and Camp decided to develop a simple application under the designation of UberCab having core functionality, focused upon the delivery of a smooth user experience. The application was put to testing in early 2010 for the very first time in New York, having the practical capacity of only three big black limousines. It was an effortless mobile application designed for iPhone holders to order a car ride.

The comfort of getting a ride over just a click enhanced the app’s popularity in quite a short span of time. UberCab was initially designed for luxurious cars, but the collection of advantageous user feedback compelled the inventors to iterate the product and reach Uber.

Getting out of your comfort zone just for the sake of shopping could be exasperating. Therefore, Nick Swinmurn, the founder of Zappos, an e-commerce platform decided to make the things available over just a few clicks.

Nick started the Zappos journey with a very basic design consisting of only a few pictures of shoes taken by himself from a few distinct shops. The entire process was not being performed to earn revenue rather it was just to test the practicality of the idea. While developing an MVP, Nick just wanted to recognize people’s interest in shopping on an online platform.

Zappos turned out to be a simple yet effective online solution for people wishing to purchase their necessities from the comfort of their beds. Under the supervision of Amazon, Zappos is ruling the fashion sphere with an annual profit of over 1 billion dollars.

MVP development is not only beneficial for startups but also valuable for companies aspiring to adopt digital transformation. MVP mitigates the enterprise’s capital risk and integrates your businesses with modern software solutions. MVP grips the power of designing the fate of a startup. So, no need to wait for the right time. Hire the Top-Rated MVP Software Developers from Alsyke who have the best in MVP developers at affordable packages for the development of MVP for startups. Get in touch with us and witness your ideas taking a realistic shape.

Schedule a free consultation with our specialists to clear things up.

MVP vs. POC: What’s The Difference?
UX VS UI Design: What’s the Difference Between them?
Top 5 Successful Startups that Began with MVP
Dedicated Development Team: Reduce your Cost Today!
How to Create an MVP for SAAS Startup?

Schedule a free consultation with our specialists to clear things up.